Memorial Tribute to Beverley M. Bowie ( 1914- 1958)
The Society says good- bye to a talented wordsmith.
Skiing in the United States
At a growing number of snowy resorts from Maine to California, Americans find thrills zooming down steep slopes on a pair of boards.
Building a New Austria
No strangers to invasions and occupation, Austrians liberated from the grip of Russian troops look confidently to the future.
Maine’s Lobster Island, Monhegan
While others celebrate the coming of the new year on December 31, residents of Monhegan turn in early to be ready for their biggest day: the opening of lobster season.
Long, George W. : 1913- 1958 { Memorial Tribute to George W. Long ( 1913- 1958) }
A Portuguese plane vanishes at sea and, with it assistant editor Long, lost in the line of duty.
Reaching for the Moon
At Florida’s Cape Canaveral, countdown begins in earnest for man’s lunar quest.
Martinique: A Tropical Bit of France
Building- battering earthquakes and hurricanes haven’t quelled the spirit of a Caribbean island where French language and calypso music blend.

Be the first to review “National Geographic February 1959” Cancel reply 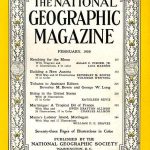