The Caves of the Thousand Buddhas
Tuhnwang, in northwest China, was the last stop for water and supplies along the ancient Silk Road. Few Westerners have visited the Caves of the Thousand Buddhas, where monuments to the Buddha were commissioned by travelers seeking safe journeys.
[ Yankee] Roams the Orient
A report from the fourth voyage of a ship called the Yankee, as the brigantine and her crew complete the second half of their 18- month trip around the world.
Africa’s Uncaged Elephants
A photo- essay by Quentin Keynes, the great- grandson of Charles Darwin, shows a herd of African elephants in their natural habitat.
Long Island Outgrows the Country
A look at Long Island’s contrasts from Brooklyn’s three million residents, through Coney Island and Levittown to the exclusive Hamptons, and the lonely Montauk lighthouse.

Be the first to review “National Geographic March 1951” Cancel reply 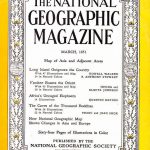