To 76, 000 Feet by [ Strato- Lab] Balloon: Two Navy Meteorologists Reach Record Height with a Light Gasbag of Transparent Plastic and Survive a Fall of 14 1/ 3 Miles
With walls thinner than a piece of paper, this 128- foot- diameter balloon lifts a mini- lab beyond the 21- year- old record of Explorer II before plummeting in a stomach- churning uncontrolled fall.
Dinkelsbühl Rewards Its Children: Every Year This Medieval German Town Repays a 300- year- old Debt to Youngsters Who Saved It from Fire and Pillage
Each July, this walled German town honors legendary children who averted certain destruction in medieval times.
Roman Life in 1, 600- year- old Color Pictures: Archeologists Uncover Brilliant Mosaics in an Ancient Villa in Sicilty, Preserved for Centures by an Avalanche
Scenes of women athletes, noblemen, and big game hunters come to life in carefully excavated mosaic floors of a Sicilian villa.
Charting Our Sea and Air Lanes: The U. S. Coast and Geodetic Survey, 150 Years Old, Ranges High, Wide, and Deep in Search of Facts to Aid Navigators
Workers from the U. S. Coast and Geodetic Survey chart coastal waters of the United States and collect data points for navigators.
Along the Storied Incense Roads of Aden
Beyond the port of Aden stretches the little- traveled hinterland of the British colony Yemen, a land of desert tribes and potential petroleum wealth.
Wisconsin, Land of the Good Life: Titan of Industry, America’s Dairyland, Paradise for Sportsmen- -The Many- sided Badger State Is All These and More
Singing societies and colorful folk festivals celebrate Old World ties in a state humming with dairying, industry, and a rapidly expanding port which ships goods to the world.

Be the first to review “National Geographic February 1957” Cancel reply 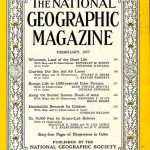