Man- of- War Fleet Attacks Bimini: Captured Invaders Reveal Their Remarkable Armament in Action for the Color Camera
Thousands of Portuguese man- of- war jellyfish were beached in Bimini as a result of a late January storm. This provided scientists a rare opportunity to study the poisonous creatures in relative safety.
Our Universe Unfolds New Wonders: Multitudes of Heavenly Bodies and Clues to Creation’s Riddles Are Found by the National Geographic- Palomar Sky Survey
In 1949, the National Geographic Society and the California Institute of Technology launched a four- year project at Palomar Observatory to photographically map the heavens. With the project at its halfway point, the head astronomer tells of the great nu
Yemen Opens the Door to Progress: American Scientists Visit This Arabian Land at the Invitation of Its King to Improve the Health of His People
A group of American scientists and doctors travel to Yemen at the invitation of its king, to improve the health of the Yemeni people.
Clove- scented Zanzibar: On a Lush African Island and [ Arabian Nights] City Thrives on Spice and Copra
Zanzibar and Pemba, tiny islands off the east coast of Africa, enjoy the benevolent protection of the Sultan of Oman and the British Empire. These historic islands produce four- fifths of the world’s clove crop.
Vacation Tour Through Lincoln Land
A family spent one summer vacation tracing the route that young Abraham Lincoln took from Kentucky through Indiana, to Illinois.

Be the first to review “National Geographic February 1952” Cancel reply 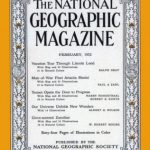