Strife- torn Indochina
Laos, Cambodia, and Vietnam are the scenes of violence and unrest as numerous factions vie for control of the former French colonies.
Sky- high Bolivia
This photo essay shows everyday life in La Paz, the Bolivian capital located two miles above sea level.
Puya, the Pineapple’s Andean Ancestor
The Puya raimondii, a distant cousin of the pineapple, is the world’s largest bromeliad. This gigantic herb, found only in Bolivia and Peru can grow to a height of more than 30 feet. It blooms once in 150 years and then dies.
Peru, Homeland of the Warlike Inca
In the aftermath of an earthquake that leveled parts of Cuzco, Kip Ross reports on the Inca’s enduring cultural legacy in and around this sacred city.
Seeing the Earth from 80 Miles Up
The U. S. Army has been using captured German V- 2 rockets to explore Earth’s outer atmosphere. Cameras placed in the V- 2 have returned spectacular photos of the Earth from a hitherto- unknown perspective.
Lake Sunapee’s Golden Trout
This photo essay profiles the rare and beautiful golden trout and the efforts to preserve its New England habitat.
Men Against the Hurricane
Peacetime assignments of Navy and Air Force crews include tracking and analyzing hurricanes. The author learns how weather experts predict where hurricanes will go and how to minimize the damage.

Be the first to review “National Geographic October 1950” Cancel reply 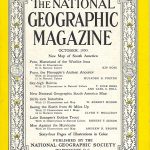