Milan- -Where Italy Gets Down to Business
Engine of one of the world’s most vigorous economies, workaholic Milan promises to ease Italy’s way within the new Europe. A double supplement map examines the changing face of the continent.
Whale Sharks, Gentle Monsters of the Deep
Largest of fishes, these gentle monsters of the deep gather by the score each year to feed at a reef off Western Australia, but knowledge of their behavior remains elusive.
Crucibles of Creation: Volcanoes { Volcanoes: Crucibles of Creation}
Horrific explosions from the underworld scorch the earth with liquid fire and block out the sun with ash. But these vehicles of destruction also gave birth to land, sea, and atmosphere.
The Hard Ride of Route 93
Take your tools and your time when you drive Highway 93 from Arizona to Alberta. The narrow lanes don’t forgive mistakes, and the offbeat folks you meet don’t ask many questions.
Gatekeepers of the Himalaya
For decades the Sherpas of Nepal have aided foreign climbers on expeditions in their mountain realm. Now, as a tribute to their people, an all- Sherpa team has scaled Everest for the first time.

Be the first to review “National Geographic December 1992” Cancel reply 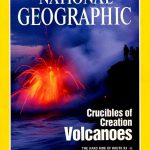