The Unknown Giants: Sperm and Blue Whales { Rare Look At Sperm and Blue Whales, The Unknown Giants}
How do the heirs of Moby Dick communicate and socialize? Zoologist Hal Whitehead tells of sperm whale studies in the Indian Ocean. As a bonus, blue whales paid the scientists a visit. Photographs by Flip Nicklin.
Tiger! Lord of the Indian Jungle
By elephant and jeep, Stanley Breeden and Belinda Wright stalk the great cat, capturing the violent and tender sides of its life.
Life Breath of Half the World: Monsoons { Monsoons: Life Breath of Half the World}
Seasonal rains each year bring both havoc and renewal to half the world’s population. Priit J. Vesilind and Steve McCurry follow the great monsoons.
The One Less Traveled by. .. : A Journey Down Old U. S. 1 { A Journey Down Old U. S. 1}
The first highway from Maine to Florida is today largely bypassed and much abused, but Bruce Dale finds glorious stretches and fascinating people along the way.
Beyond Supermouse: Changing Life’s Blueprint { Beyond Supermouse: Changing Life’s Genetic Blueprint}
Hope and controversy surround the fast- developing field of biotechnology. Geneticist Robert F. Weaver and photographer Ted Spiegel report on the promise for agriculture, animal husbandry, medicine, and energy.

Be the first to review “National Geographic December 1984” Cancel reply 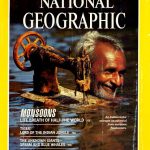