Diary of the President’s Daughter: I See America First { I See America First}
After President Lyndon Johnson urged Americans and foreigners to vacation in the U. S. , his eldest daughter embarked on a trailer caravan to visit the scenic wonders of eight western states.
Finned Doctors of the Deep
Pacific cleaner wrasses nibble food from the mouths and skin of larger fish in the Pacific. In exchange, the wrasses win protection from predators in a peaceful coexistence called symbiosis.
The Land of Galilee
From a Christian’s perspective, the author recounts his visits to Biblical sites in Israel. He also reports on kibbutzim and plans for Jordan River water.
[ Finisterre] Sails the Windward Islands
From the deck of a 38- foot ocean cruiser- racer, a lifelong skipper observes changes in the West Indies brought by tourism.
New Discoveries Among Africa’s Chimpanzees
Four years into her pioneering study of great apes in Gombe National Park in Tanzania, Jane Goodall reports on her observations – – and on her 1964 marriage to photographer Hugo van Lawick.

Be the first to review “National Geographic December 1965” Cancel reply 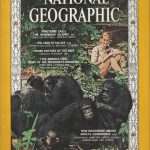