Bhutan: Mountain Kingdom Between Tibet and India
King Jigme Dorji Wangchuk eases his closed- door policy to allow a Western journalist to travel through a spectacular land.
Angola, Unknown Africa
The author reports on this province of Portugal, just before it explodes into political upheaval.
The Pilot’s Story: Astronaut Shepard’s Firsthand Account of His Flight
The engineer- test pilot recounts his record- setting, 15- minute ride to space and back.
The Flight of [ Freedom 7]
A physician for the astronauts gives an eyewitness account of America’s first manned venture into space.
The United Nations: Capital of the Family of Man
Since its inception in 1945, the UN General Assembly has grown to include 99 nations working to mediate disputes and fight hunger, disease, and illiteracy.
Date Line: United Nations, New York
The organization’s headquarters hums with the daily work of international peacekeeping.
Flags of the United Nations
The colorful banners of 99 countries and the UN are presented with historical explanation.

Be the first to review “National Geographic September 1961” Cancel reply 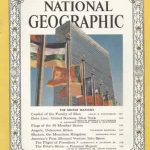