Scotland from Her Lovely Lochs and Seas
Cruising the country’s lochs, canals, and seas offers a unique view of this island cluster.
How Bats Hunt With Sound
A worm- shooting gun and a high- speed electronic flash enable this scientist to photograph and study bats feeding.
Venice, City of Twilight Splendor { Venice: Twilighted Splendor Floats Serene Amid a Tide of Change}
Founded by mainlanders fleeing barbarians, an independent city state grew to be the cultural and trading center of Europe.
Witness to a War
As artful with drawings as with words, this young and adventurous journalist left as his legacy a body of work detailing battles and behind- the- scenes dramas of the U. S. Civil War.
The Civil War
America’s Civil War pitted brother against brother and a nation against itself. After a century, echoes from the bloody conflict reverberate through our national consciousness.

Be the first to review “National Geographic April 1961” Cancel reply 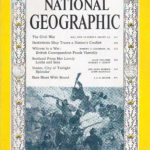