Caracas, Cradle of the Liberator: The Spirit of Simo?n Boli?var, South American George Washington, Lives On in the City of His Birth
Freed from Spain by revolutions led by Bolivar, who was from the beautiful capital city of Caracas, Venezuela thrives today, exporting oil, coffee, gold, pearls, and orchids.
Sheep Dog Trials in Llangollen: Trained Collies Perform Marvels of Herding in the Cambrian Stakes, Open to the World
Llangollen, a town in North Wales, hosts a sheep dog contest known as the Cambrian Stakes to evaluate the herding skills of collies.
The Nation’s Capital by Night
These stately photographs illuminate the monuments and buildings of Washington, D. C. , at night.
By Felucca Down the Nile: Giant Dams Rule Egypt’s Lifeline River, Yet Village Life Goes On As It Did in the Time of the Pharaohs
On a two- month journey aboard a small sailboat, or felucca, a crew travels down the Nile, past Egypt’s villages and ancient temples.
1940 Paradox in Hong Kong
Where East meets West, the British colony of Hong Kong, has become a crowded shelter for refugees of the war in China.

Be the first to review “National Geographic April 1940” Cancel reply 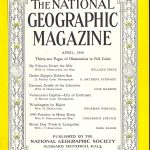