Hail Colombia!
Three Andes ranges run through tropical, mountainous Colombia, which seized its independence from Spain in 1810.
Along the Old Silk Routes: A Motor Caravan with Air- conditioned Trailer Retraces Ancient Roads from Paris across Europe and Half of Asia to Delhi
Rolling along paved roads in a 40- foot motor trailer, a modern caravan follows the ancient Silk Route, exploring Europe and Asia from Paris to Delhi.
Dipo, the Little Desert Kangaroo
Related to the pocket gopher, kangaroo rats live in the deserts of North America.
Return to Manila
After 42 years of American rule, Manila, the capital of the Philippines, has evolved into a modern city – – radios have replaced church bells and choirs.
Our Air Frontier in Alaska
Flying 10, 000 miles over central southern Alaska, an Army officer describes his adventures in America’s sparsely populated frontier.

Be the first to review “National Geographic October 1940” Cancel reply 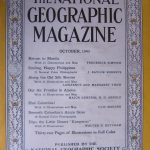