Timbuktu and Beyond: Desert City of Romantic Savor and Salt Emerges into World Life Again as Trading Post of France’s Vast African Empire
On an 8, 000- mile trek, an expedition studies the cultures of French West Africa, visiting Timbuktu and other colorful villages.
New Brunswick Down by the Sea
Discovered by Jacques Cartier in 1534, the Canadian province of New Brunswick devotes itself to fishing and logging.
Airplanes Come to the Isles of Spice: Once Magnet of World Explorers, the Moluccas Again Stand at Crossroads of History in the Netherlands Indies
Luring explorers as long ago as 300 B. C. with nutmeg and cloves, the Moluccas, the Isles of Spice of the Netherlands Indies ( Indonesia) , are important today for their tin, rubber, and oil.
Samoa- -South Sea Outpost of the U. S. Navy
These photographs celebrate the Polynesians of the Pacific islands of Samoa, now the site of an American naval base.
Fruitful Shores of the Finger Lakes
Formed by glaciers, the Finger Lakes district of western New York state is rich in vineyards, orchards, steep cliffs, and waterfalls.

Be the first to review “National Geographic May 1941” Cancel reply 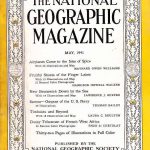