Peiping’s Happy New Year
The Chinese city of Peiping, formerly known as Peking, celebrates the Lunar New Year in late January, jubilantly casting off the old year with feasts and festivals.
Flying the Pacific
A seaplane voyage over the Pacific Ocean offers a glimpse of Guam, the Philippines, Midway, and other Pacific islands.
Beyond Australia’s Cities
Most of spacious Australia lacks cities but teems with remote mines, kangaroos, sheep, cattle, and wildlife.

Be the first to review “National Geographic December 1936” Cancel reply 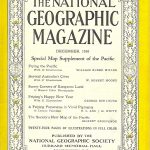