The Stone Beehive Homes of the Italian Heel: In Trulli- Land the Native Builds His Dwelling and Makes His Field Arable in the Same Operation
In the stone- studded boot heel of Italy, farmers harvest rocks from the fields to build conical stone roofs for their houses.
Seeking the Mountains of Mystery: An Expedition on the China- Tibet Frontier to the Unexplored Amnyi Machen Range, One of Whose Peaks Rivals Everest
Over 25, 000 feet tall at the highest peak, the snow- crowned Amnyi Machen Mountains ( A’ nyemagen Shan) on the Tibet- China border form a natural barrier that fosters a highland culture unaffected by outside influences.
Among the Hill Tribes of Sumatra
Straddling the Equator, the bountiful island of Sumatra remains comparatively unspoiled and its native people prosper under a matriarchal social system.

Be the first to review “National Geographic February 1930” Cancel reply 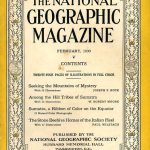