Afghanistan Makes Haste Slowly
Shrouded in mystery for many years, Afghanistan emerges onto the world stage as progressive rulers work to implement reform, and the author encounters hospitality as he travels through the country.
The Road of the Crusaders: A Historian Follows the Steps of Richard the Lion Heart and Other Knights of the Cross Over the Via Dei
Traces of Christian soldiers linger in the Middle East in the form of castles and churches, some in ruins, some in use.
A Bit of Elizabethan England in America: Fisher Folk of the Islands Off North Carolina Conserved the Speech and Customs of Sir Walter Raleigh’s Colonists
Decades of isolation from the mainland foster the local dialect and independent attitude of North Carolina’s barrier island residents.

Be the first to review “National Geographic December 1933” Cancel reply 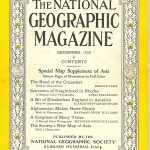