Malaysia: Rising Star
After 40 years of independence this Southeast Asian nation has achieved peace and plenty – – at a cost.
Oregon’s Outback { A Special Place: Oregon’s Outback}
In the state’s rugged southeast corner the wind is a constant companion, and water is as rare as a neighbor.
An Empire’s Enduring Reach { Roman Legacy; The World According to Rome}
Fifteen centuries after the fall of Rome, the empire’s influence still pervades our culture in law, language, architecture, and government.
Thalay Sagar Climb { The Frozen Face of Thalay Sagar}
No one has reached the summit of this 22, 650- foot Himalayan peak by its north face. Two Americans climbers find out why.
New Light on Coral { A New Light in the Sea}
Red Sea corals explode with fluorescent colors under the glow of ultraviolet light.
Barrier Islands { Islands at the Edge}
Shifting slivers of sand, the barrier islands that protect the Atlantic and Gulf coasts lure beach lovers into a losing battle with nature.
Malaysia’s Secret Realm
Mists wreathe Sabah on the northern tip of Borneo, where virgin rain forest shelters fragile treasures.

Be the first to review “National Geographic August 1997” Cancel reply 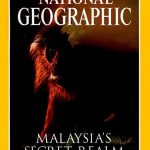