Annapolis: Camelot on the Bay
Maryland’s capital since early colonial days has become a preservation showcase as well as a sailor’s haven on the Chesapeake. Larry Kohl and photographer Kevin Fleming document the struggle to maintain tradition and prosperity.
Frederic Remington- -The Man and the Myth { Remington, the Man and the Myth}
The celebrated American painter and sculptor helped make cowboys and Indians legendary. Louise E. Levathes and photographer Chris Johns trace his career east and west.
Lemurs: On the Edge of Survival { Madagascar’s Lemurs: On the Edge of Survival}
Local and international conservationists seek to prevent the extinction of these intriguing primates that live in the dwindling forests of earth’s fourth largest island. Zoologist Alison Jolly reports; photographs by Frans Lanting.
Kyongju, Where Korea Began
In this ancient capital where spirit and reality merge, Cathy Newman finds the soul of Korea. Photographs by H. Edward Kim.
The South Koreans
Aggressive, highly competitive, and reluctant to compromise, South Koreans push their economy forward, while keeping a wary eye on their kinsmen to the north. By Boyd Gibbons, with photographs by Nathan Benn.
Triumph of [ Daedalus]
On the trail of legend, a Greek pilot pedals from Crete to Santorin for a new record for human- powered flight, a feat described by John S. Langford, photographed by Charles O’ Rear.

Be the first to review “National Geographic August 1988” Cancel reply 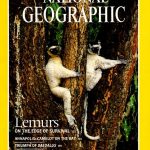