The Phoenicians, Sea Lords of Antiquity
From their home port in today’s Lebanon, Canaanite seafarers – – the Phoenicians – – explored and traded far afield, leaving their ingenious wares and alphabet throughout the Mediterranean world and beyond.
Rare Look at North Korea
The first American photojournalist admitted in a quarter century recalls events that divided the Korean peninsula, and finds that the communist nation can feed itself.
The Contented Land: New Zealand’s North Island { New Zealand’s North Island: The Contented Land}
Blessed with a moderate climate, New Zealand’s northern half shelters most of the nation’s people, agriculture, and industry.
Wisconsin’s Menominees: Indians on a Seesaw
Subjected to an experiment called termination involving the end of federal supervision and aid, this tribe floundered until Congress restored federal protection and recognition.
How the Decoy Fish Catches Its Dinner { Something’s Fishy About That Fin! }
The first live specimens of the rare decoy fish surfaced during a salvage operation off Oahu, Hawaii.
What You Didn’t See in Kohoutek
Widely heralded, the comet Kohoutek proved too pale for most observers to see last winter, but scientists gleaned useful information.
The Maligned Coyote { The Lone Coyote Likes Family Life}
A field study in Wyoming concludes that the reputed loner is dedicated to family and clan.

Be the first to review “National Geographic August 1974” Cancel reply 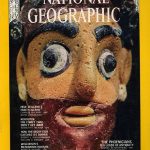