The Great Lakes: Is It Too Late? { Superior- Michigan- Huron- Erie- Ontario: Is It Too Late? }
A shipping thoroughfare, water source, and sewer shared by the U. S. and Canada, the Great Lakes embark on a battle against pollution.
Diving Beneath Arctic Ice
The author and other scientists set up a manned research station in Canada’s Resolute Bay to test men and equipment against the cold.
Algeria: Learning to Live With Independence
Rebounding from bitter civil war, Africa’s second largest nation exhibits a dual personality – – Arabic by fiat of its socialist government, yet French in the language and culture of its cities.
Friend of the Wind: The Common Tern
Thousands of terns fly to Cape Cod, Massachusetts, from South America each spring – – but in fewer numbers than ever before.
Stalking the West’s Wild Foods
A naturalist takes his family foraging for edibles in four western states to demonstrate the bounty of nature.
Gotland: Sweden’s Treasure Island
A former Viking stronghold, the Baltic island of sunny Swedes lives by farming, small- scale industry, and tourism.

Be the first to review “National Geographic August 1973” Cancel reply 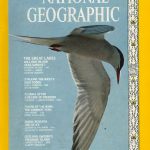