Stop- and- Go Sail Around South Norway: Steep- walled Fjords, Historic Seaports, and Friendly People Greet a Connecticut Yankee Cruising Along Viking Coasts
Steep- walled fjords, historic seaports, and friendly people greet the author on a sailing trip from Bergen to Oslo around the southern coast of Norway.
A New Bird Immigrant Arrives: First in History to Settle in Mainland North America Without Known Human Aid, the Cattle Egret of the Old World Suddenly Appears in Several States
The U. S. has a new avian citizen: the cattle egret. This member of the heron family appears to have arrived from Europe via South America, using only the power of its wings.
When Giant Bears Go Fishing: Largest Land- dwelling Carnivores Gather in a Secluded Valley to Feast on a Favorite Delicacy: Live Alaska Salmon
When the salmon swim upstream to spawn, the Alaskan Peninsula brown bears converge on a secluded spot to enjoy some fishing. This is one of the rare occasions when bears can be seen in large groups.
Colorado by Car and Campfire: Lured by the Grandeur of Distant Peaks, Four Adventurous Girls Try Their Luck at Week- end Mountaineering
A group of four women plot a series of weekend camping trips designed to take in many of the scenic peaks of the Colorado Rockies.
North with Finland’s Lapps { North With Finland’s Lapps: Big in Heart and Hospitality Are the Little People of Lapland- -and a Taxi Will Take You to an Arm of the Arctic Ocean}
Lapland stretches across four countries: Norway, Sweden, Finland, and Russia. The Lapps of Finland have been the least touched by modern technology; they still follow the reindeer herds and live much as their ancestors did.

Be the first to review “National Geographic August 1954” Cancel reply 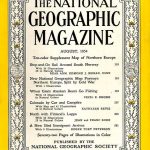