Chile’s Uncharted Cordillera Sarmiento
Stormy seas, perpetual clouds, and hurricane- force winds have kept the peaks of the Sarmiento unscaled – – until now. Putting them on the map, climbers challenge cliffs, ice fields, and fjords.
John Wesley Powell: Vision for the West
Renowned for his pioneering voyage through the Grand Canyon, the one- armed explorer also made lasting contributions to geography and voiced visionary warnings about development in the West.
Riddle of the [ Lusitania]
Torpedoed by a German submarine on May 7, 1915, the British luxury liner Lusitania sank in 18 minutes, claiming 1, 200 lives. Nearly 300 feet down in the Atlantic, scientists investigate the tragedy.
The Everglades: Dying for Help
The vast saw grass wilderness on Florida’s southern tip has endured fire, drought, and hurricane – – and revived. But can Everglades National Park survive the continuing diversion of its freshwater?
Kamchatka: Russia’s Land of Fire and Ice
Nine time zones east of Moscow, this peninsula of fire and ice reels from economic upheaval. Entrepreneurs hope fisheries and adventure tourism will bring hard cash and a niche among Pacific Rim markets.

Be the first to review “National Geographic April 1994” Cancel reply 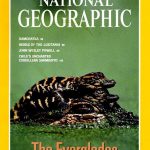