Across the Pacific by Balloon { The Flight of [ Double Eagle V] ; First Across the Pacific: The Flight of [ Double Eagle V] }
Despite the burden of tons of ice, a gigantic balloon successfully crosses the world’s largest ocean. Ben L. Abruzzo, captain on the historic passage, describes the hazardous ups and downs of the flight.
The Civilizing River Seine { The Civilizing Seine}
Journeying along the River Seine and through 2, 500 years of French history, Charles McCarry and David L. Arnold follow this stream of legend and love from its source in the hills of Burgundy to its end in the English Channel.
Eternal Sinai
Uprooted settlements and disrupted lives mark the final stages of Israel’s return to Egypt of a land captured in the six- day Arab- Israeli war of 1967. Harvey Arden reports on this biblical great and terrible wilderness. Photographs by David Doubilet;
New Light on Humpback Whales { New Light on the Singing Whales}
Courtship seems to move male humpbacks to song, and their music reveals broader migrations than had been thought. Zoologist Roger Payne sets the stage for remarkable photographs by Flip Nicklin.
Home to the Heart of Kentucky
Nadine Brewer returns to the land of her childhood and finds some timeless ways and values persisting amid growing towns and a prospering countryside. Photographs by William Strode.

Be the first to review “National Geographic April 1982” Cancel reply 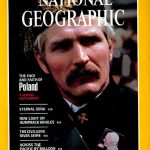