One Canada- -or Two?
A political upset has given new impetus to the drive toward an independent Quebec. Peter T. White and Winfield Parks report on the most explosive issue Canadians have faced in this century.
Unseen Life of a Mountain Stream
Naturalist William H. Amos takes his cameras into the cold, seemingly inhospitable world of a Vermont brook, and finds it teeming with life.
Trek to Nepal’s Crystal Mountain { Trek to Nepal’s Sacred Crystal Mountain}
Author- photographer Joel F. Ziskin crosses lofty Himalayan passes to study a remote pocket of Tibetan culture.
Striking It Rich in the North Sea
Rick Gore finds awesome new technology, Texas oilmen – – and billions of dollars – – at work in this newest of the world’s major oil- producing regions. Photographs by Dick Durrance II.
A Walk Across America
A young Connecticut Yankee travels afoot from New York State to New Orleans. Along the way he gains a new awareness of his country – – and of himself. By Peter Gordon Jenkins.
Japan’s Warriors of the Wind
Dueling with huge kites, Hamamatsu’s neighborhoods honor their firstborn sons. By David Alan Harvey and John Eliot.

Be the first to review “National Geographic April 1977” Cancel reply 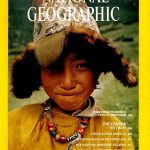