The England of Charles Dickens
The 19th- century novelist drew on his own difficult life to create vivid characters in a harsh environment and to expose social evils of his day.
In Touch With Nature
Two camps in Wisconsin’s lake country teach boys and girls the wonders of nature through a process called acclimatization.
Damascus, Syria’s Uneasy Eden
Crossroads of antiquity, the Muslim capital feels the weight of its continuing struggle with Israel.
Where Solitude Is in Season: Snow- mantled Stehekin { Winter in Snowy Stehekin; Snow- mantled Stehekin: Where Solitude Is in Season}
The southern gateway to North Cascades National Park in central Washington proves a welcome winter solitude from a hectic world, to this newcomer.
Drought Threatens the Tuareg World
A seven- year dry spell in the southern Sahara endangers the pasture and livestock that sustain Tuareg nomads.
Timber: How Much Is Enough?
Lumber prices peaked in 1973, raising concerns about the exportation of the renewable resource and the cutting of national forests – – as well as an environmental impact.

Be the first to review “National Geographic April 1974” Cancel reply 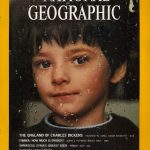