Winter Caravan to the Roof of the World
Along Afghanistan’s Wakhan corridor, a Kirghiz camel caravan negotiates a perilous route – – a portion of which was once trod by Marco Polo.
The Wild Burros of Death Valley { Getting to Know the Wild Burros of Death Valley}
Descendents of the wild ass of northeast Africa, these Spanish imports find protection on most federal lands, like Death Valley, but not in all national parks and monuments.
Diving With Sea Snakes
Off eastern Australia a herpetologist and divers investigate the behavior, venom, and anatomy of the little- known sea snake, a relative of the cobra.
Springtime of Hope in Poland
A wave of strikes and demonstrations has led to better living conditions, privatization, and freedom in the communist nation. But will the Russians call a halt with tanks as they did in Czechoslovakia?
Easter Greetings From the Ukrainians
Wherever Ukrainians live, an ancient art flourishes each Easter: the jewel- like painted egg. How- to directions are included.
We’ re Doing Something About the Weather!
A survey of man’s attempts to understand and control the weather is accompanied by photographs showing its power and fury.

Be the first to review “National Geographic April 1972” Cancel reply 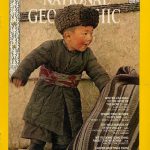