Ceylon, the Resplendent Land { Ceylon}
In the colorful island nation off India, a Sinhalese majority practices Buddhism beside Hindu Tamils and a smattering of Christians and Muslims.
Space Rendezvous, Milestone on the Way to the Moon
In the first meeting ever of manned spacecraft, pilots of Gemini 6 and Gemini 7 come within a foot of docking, a step on the reach for the moon.
Working for Weeks on the Sea Floor
A house- workshop called Conshelf Three shelters six oceanauts exploring the Mediterranean seafloor 370 feet below the surface.
Wyoming: High, Wide, and Windy
One of the largest states, with one of the smallest populations, bears the look of the Old West but ranks as a major mineral producer.

Be the first to review “National Geographic April 1966” Cancel reply 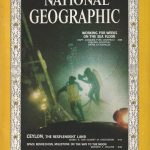