Man’s Deepest Dive
A bathyscaph probes the Pacific Ocean’s Mariana Trench, almost seven miles down.
The Dauntless Little Stilt
A pair of industrious shorebirds raise their egg- filled nest above the reach of a flood.
Knocking Out Grizzly Bears for Their Own Good
With fewer than a thousand grizzlies left in the lower 48, the Craighead brothers and colleagues tag tranquilized bears for a conservation study.
Showcase of Red China { The City They Call Red China’s Showcase}
Franc Shor’s reminiscences accompany a portfolio of Peking ( Beijing) photographs.
Salzkammergut, Austria’s Alpine Playground
Visitors find respite in this picture- perfect region of Austrians working against a stunning backdrop of mountains and lakes.
Philadelphia Houses a Proud Past
Colonial homes, some simple and some stately, recall the birth of the nation.
Extraordinary Photographs of Earth Taken by Satellite { Our Earth as a Satellite Sees It}
Whirling in orbit some 450 miles above the Earth, the first worldwide weather satellite snaps two photos every minute.

Be the first to review “National Geographic August 1960” Cancel reply 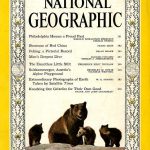