The MacMillan Arctic Expedition Sails
The MacMillan Arctic Expedition finally sets sail on a mission of Arctic exploration, with National Geographic Society photographers on board to document the unseen land to the north.
From England to India by Automobile: An 8, 527- mile Trip Through Ten Countries, from London to Quetta, Requires Five and a Half Months
In a car dubbed Felix the Second, after the cartoon cat, three men survive customs, sandstorms, and only two tire punctures during their journey, of which 3, 000 miles were void of road or track.
Tripolitania, Where Rome Resumes Sway: The Ancient Trans- Mediterranean Empire, on the Fringe of the Libyan Desert, Becomes a Promising Modern Italian Colony
Though under Italian military control, a diverse population perpetuates traditions beyond a modern harbor and main streets.
Toilers of the Sky: Tenuous Clouds Perform the Mighty Task of Shaping the Earth and Sustaining Terrestrial Life
They begin as no more than a drop of water, yet throughout the millennia of Earth’s existence clouds fill oceans, wash away mountains, and carve continents.
Waimangu and the Hot- Spring Country of New Zealand: The World’s Greatest Geyser Is One of Many Natural Wonders in a Land of Inferno and Vernal Paradise
Spawned by a volcanic eruption in 1886, the powerful Waimangu geyser shares the Rotorua region on the North Island of New Zealand with lush forests.

Be the first to review “National Geographic August 1925” Cancel reply 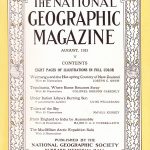