Report from the Locust Wars: From Africa to India Men Fight an Ancient Enemy with American Aid; the Authors Describe Operations in Iraq’s Vast Desert
From Africa to India, farmers, agriculturists, and scientists wage war against the migratory grasshopper, sometimes called a locust. The authors joined the campaign in the Iraqi desert.
Washington’s Historic Georgetown: A Proud Colonial Port, Made Part of Young America’s New Capital, Refused to Be Abolished and Now Sees Its Old Identity Restored
The oldest part of Washington, D. C. , was once a colonial port. Even though it has been subsumed into the capital city, it retains some of its colonial charm.
Eyes on the China Coast
The coast of China, between the mainland and Formosa ( Taiwan) , is one of the world’s hot spots, as Nationalist troops stand by to ward off invasion by communist forces.
The Society’s Hubbard Medal Awarded to Commander MacMillan
For outstanding Arctic exploration from 1908 to 1952, the National Geographic Society awards Comdr. Donald Baxter MacMillan its highest honor.
Three Months on an Arctic Ice Island: Floating on a Glacial Fragment, U. S. Air Force Scientists Probe Top- of- the- World Mysteries Within 100 Miles of the Pole
An ice island, spin- off of a huge glacier, provides a 150- foot- thick platform for U. S. scientists to establish a camp and study the secrets of the Arctic Ocean.
New Guinea’s Rare Birds and Stone Age Men: Filming Exotic Birds of Paradise and Living with Primitive Tribes, an Ornithologist Scores Important New Firsts
While filming exotic birds of paradise and living with primitive tribes in New Guinea, an ornithologist scores some important new firsts.

Be the first to review “National Geographic April 1953” Cancel reply 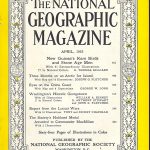