American Fighters Visit Bible Lands
GIs visiting Palestine ( now Israel) and Egypt, are often surprised to discover how ancient traditions and modern conveniences coexist in the lands where prophets walked.
These Missourians
With Harry Truman the first Missourian in the White House, now seems an opportune moment to visit this state in the middle of the country. Frederich Simpich reports from the heartland.
Puto, the Enchanted Island
The Buddhist monks of Puto Shan, a tiny island in the East China Sea, have graciously welcomed millions of pilgrims over the centuries.
Mountain Tribes of Iran and Iraq
Life among the mountain tribes along the borders of Iran, Iraq, Turkey, and Russia is little changed from ancient days.
Yap Meets the Yanks
The small Pacific island of Yap was one of the territories liberated by the U. S. , after the defeat of the Japanese.
Quinine Hunters in Ecuador
One consequence of the war against the Japanese was a shortage of quinine, used to fight malaria. The author, Froelich Rainey, and his colleagues explored the jungles of South America in search of new sources of this essential drug.

Be the first to review “National Geographic March 1946” Cancel reply 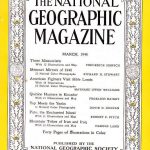