Net Results from Oceania: Collecting Aquarium Specimens in Tropical Pacific Waters
Scientists from a Chicago aquarium travel to Hawaii to collect 600 species of tropical fish for their exhibits.
Unknown New Guinea: Circumnavigating the World in a Flying Boat, American Scientists Discover a Valley of 60, 000 People Never Before Seen by White Men
In a seaplane, an expedition explores the dense forests of New Guinea, the second largest island in the world, and befriends an isolated civilization.
So Oklahoma Grew Up
Formed in 1907 from Indian and Oklahoma Territories, the state of Oklahoma spans open prairie, the Ozark Mountains, oil wells, cattle ranches, and farms.
Fighting Giants of the Humboldt
Searching for marine life for New York’s American Museum of Natural History, a boat braves the Humboldt Current, which flows up the coast of South America and carries huge marlin, swordfish, and squid.

Be the first to review “National Geographic March 1941” Cancel reply 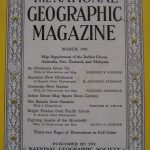