Ndebele People- -Pioneers in Their Own Land { Dilemma of Independence for South Africa’s Ndebele People: Pioneers in Their Own Land}
Offered nominal independence in a homeland, South Africa’s Ndebele people cope with daily survival in a nation beset by increasing violence over its apartheid policy. David Jeffery and South African photographer Peter Magubane report.
Grizz — Of Men and the Great Bear
Grand in size and mystique, the grizzly has been diminished by relentless erosion of its habitat. Is North America big enough for the big bear? Asks naturalist Douglas Chadwick.
Banaras: India’s City of Light
Celebrated as a center of faith and learning, Hinduism’s most sacred site draws an endless stream of pilgrims. The distinguished India- born author Santha Rama Rau and U. S. Photographer Tony Heiderer capture the spirit of this holy place on the Ganges.
Madrid: The Change in Spain
Beneath the gloss of a cosmopolitan capital John J. Putnam finds the soul of a Spanish village. Photos by O. Louis Mazzatenta.
Tide Pools: Windows Between Land and Sea
Delighting the careful beachcomber, the intricate life in these natural aquariums depends on the bounty of shifting tides. Photographer Robert F. Sisson reveals the treasures cupped in marine pools.

Be the first to review “February 1986” Cancel reply 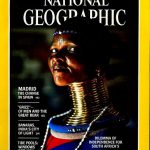