Air Power for Peace
General H. H. Arnold states the case for maintaining strong Air Forces, even in peacetime.
Bahrein: Port of Pearls and Petroleum
Already having the highest per capita wealth on Earth, Bahrain is made even more so by the discovery of oil. The article looks at the impact the petroleum business is having on the traditional life style of its inhabitants.
Holland Rises from War and Water
The tiny Kingdom of the Netherlands lost nearly 200, 000 citizens during World War II. Almost a million others were forced to work as slave laborers in Germany, Russia, and Poland. Now life in Holland seems to be returning to normal, despite the destruct
The Face of the Netherlands Indies
A photo essay features the people, street- scenes, buildings, and landforms of the Netherlands Indies.
A City That Refused to Die
The story of how the citizens of Plymouth, England refused to give in to the Nazi onslaught during World War II is told for the first time.

Be the first to review “National Geographic February 1946” Cancel reply 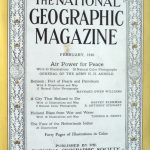