Ali Goes to the Clinic
An American doctor treats an ill Bedouin man who traveled by foot to a new hospital in Syria.
Paris Lives Again
Although spared the direct ravages of World War II, Paris, France, was still affected. Against the backdrop of the 1946 Paris Peace Conference, the city begins to regain its fabled style.
Syria and Lebanon Taste Freedom
Modernization comes to two ancient lands. Both Syria and Lebanon won freedom from France and now chart their own courses.
Mending Dikes in the Netherlands
A photographic essay of repairs to the dikes. Victims of Royal Air Force bombs, the dikes were repaired with help from the U. S. , Great Britain, and Switzerland.
Oregon Finds New Riches
Oregon prospers in the postwar era as the state grows. The timber industry remains a source of revenue, but industry, fishing, and abundant cheap power also contribute.
Fairy Terns of the Atolls
American servicemen scattered throughout the mid- Pacific encounter perhaps the most beautiful and most ethereal of all birds – – the fairy tern.

Be the first to review “National Geographic December 1946” Cancel reply 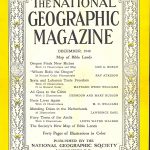