Cathedrals of England: An Artist’s Pilgrimage to These Majestic Monuments of Man’s Genius and Faith
Artist Norman Wilkinson travels to England to sketch its grandiose cathedrals – – Canterbury, Winchester, Salisbury and others – – which have endured for centuries.
Where Early Christians Lived in Rock Caverns { Where Early Christians Lived in Cones of Rock: A Journey to Cappadocia in Turkey Where Strange Volcanic Pinnacles Are Honeycombed With Hermit Cells and Monasteries}
In central Turkey, strange pinnacles of volcanic rock eroded by wind and water became the homes of devout Christians, who carved the cones’ interiors to create monasteries.
Puerto Rico: Watchdog of the Caribbean: Venerable Domain Under American Flag Has New Role as West Indian Stronghold and Sentinel of the Panama Canal
This venerable domain under the American flag has a new role as a west Indian stronghold and sentinel of the Panama Canal.
Estonia: At Russia’s Baltic Gate: War Often Has Ravaged This Little Nation Whose Identity Was Long Submerged in the Vast Sea of Russian Peoples
Remaining patient and resilient through centuries of political unrest, the tiny nation of Estonia, granted independence from Russia after the First World War, concentrates on its economic and political development.

Be the first to review “National Geographic December 1939” Cancel reply 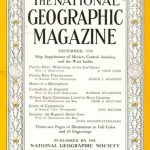