Greenland Sharks
Lurking beneath the Arctic ice, huge sharks consume seals and other large prey as if they were morsels. For the first time these sluggish, nearly blind creatures are photographed in their frigid habitat.
Borneo’s White Mountain { Searching the Depths of Borneo’s White Mountain}
Riddled with networks of unexplored caves, 3, 161- foot Gunung Buda harbors a wealth of plant and animal species in its depths and on its rain- forested slopes.
Vermont: Suite of Seasons { A Special Place: Vermont: Suite of Seasons}
Ever changing, ever the same, a far corner of the Green Mountain State known as the Northeast Kingdom qualifies as a special place to a longtime resident.
A New Day for Romania { Romania’s New Day: A Nation Savors Freedom}
With the execution of dictator Nicolae Ceausecu on Christmas Day, 1989, Romania threw off repressive communist rule. Now the nation struggles to find its place in a free- market, democratic Europe.
Valley of the Kings
In a narrow valley near Luxor, Egyptologists are excavating a royal tomb of unprecedented size, revealing new details of the lives of the pharaohs 3, 000 years ago.
Catherine the Great
Overthrowing her husband, Peter III, a German princess became Empress of Russia in 1762 and embarked on a 34- year campaign of empire building.

Be the first to review “National Geographic September 1998” Cancel reply 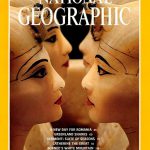