Ambassadors of Good Will: The Peace Corps
Peace Corps Director Sargent Shriver details the astounding early successes of the Peace Corps. By the third anniversary of the Peace Corps Act, volunteers had seen duty in 46 countries.
Chesapeake Country
The Chesapeake Bay derives its name from an Indian word meaning Great Shellfish Bay. The bay country is home to famous oysters, rich farmlands, and a living sense of early American history.
Slow Train Through Viet Nam’s War
The Vietnam Railway, a vital transportation link in the conduct of the war, offers passengers a terrifying ride. The trains are frequent targets of Vietcong attacks.
History Revealed in Ancient Glass
The study of ancient glass has uncovered many secrets of antiquity such as lost trade routes and the level of technical skill possessed by various civilizations.

Be the first to review “National Geographic September 1964” Cancel reply 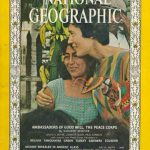