Feathered Dancers of Little Tobago
The gold- and- brown plumage of the greater bird of paradise unfolds in color photographs for the first time.
You and the Obedient Atom: Abundant Energy Released From the Hearts of Atoms Promises a Vastly Different and Better Tomorrow for all Mankind
New nuclear power plants hum with the peacetime promise of atomic energy as researchers develop further applications.
Poland Opens Her Doors: What Is it Like in Europe’s Largest Satellite After a Decade of Communist Rule?
The authors catch a rare glimpse inside Poland, held fast by communist rule for a decade.
The White Horses of Vienna
Like living equestrian statues, famed Lipizzan stallions perform leaps perfected by trainers over generations.
Blossoms That Defy the Seasons: After Six Years of Experimentation, a Utah Woman Has Learned How to Preserve Flowers Indefinitely
With a little patience and a lot of sand, the author discovers how to preserve colorful blooms.

Be the first to review “National Geographic September 1958” Cancel reply 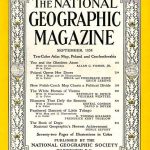