Hunting Castles in Italy
Northern Italy is dotted with many little- known castles, each with its own intriguing history.
Diamond Delaware, Colonial Still: Tradition Rules the Three Lower Counties Over Which William Penn and Lord Baltimore Went to Law
Delaware, the first state to ratify the Constitution, preserves its long history with quiet pride. Pirates such as Captain Kidd and Edward Teach once sailed along its coast.
Traveling in the Highlands of Ethiopia
A Christian and Islamic nation in northeast Africa, Ethiopia exists without a seaport and must rely on the Blue Nile and other rivers. Some archaeologists believe that the Ark of the Covenant is hidden in this mysterious land.
With the Italians in Eritrea: Torrid Colony Between the Red Sea and Ethiopia, 2, 600 Miles by Sea from Rome, Is Mobilization Place of Fascist Troops and Planes
The barren Italian colony of Eritrea began as a coal station in 1870 and is used as a military base.

Be the first to review “National Geographic September 1935” Cancel reply 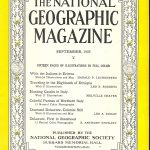