A New Country Awaits Discovery: The Draining of the Zuider Zee Makes Room for the Excess Population of the Netherlands
Dutch engineers conquer the sea with a 20- mile- long dike, gleaning approximately 550, 000 acres of new farmland.
Some Odd Pages from the Annals of the Tulip: A Made Flower of Unknown Origin Took Medieval Europe by Storm and Caused a Financial Panic in the Netherlands
Nearly scentless but colorful and easily cultivated, tulips arrived in Europe from the East in the 16th century and now bloom on both sides of the Atlantic.
Pieces of Silver
More than a medium of exchange, silver’s functions extend to the fields of photography and table service.
Cuba- -The Isle of Romance
After a lengthy absence a former resident returns to Cuba and compares modern development with the island’s old ways.

Be the first to review “National Geographic September 1933” Cancel reply 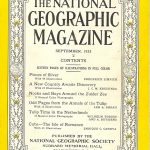