Four Faces of Siva: The Mystery of Angkor
Once an Asian metropolis, the civilization of Angkor was abandoned and left to the jungle.
By Seaplane to Six Continents: Cruising 60, 000 Miles, Italian Argonauts of the Air See World Geography Unroll, and Break New Sky Trails Over Vast Brazilian Jungles
An intrepid Italian air force pilot plots an arduous seaplane course, touching six continents and three oceans.
A Voyage to the Island Home of Robinson Crusoe
A Smithsonian scientist explores Crusoe’s stomping ground, the island of Juan Fernandez, while collecting specimens of sea life.
Genoa, Where Columbus Learned to Love the Sea
Genoa’s most recognized resident, Columbus cherished his home. After his third voyage to America, he offered one- tenth of his income in trust to benefit the citizens of this bustling port city.

Be the first to review “National Geographic September 1928” Cancel reply 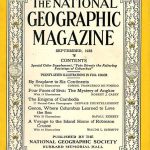