The Power of Letting Off Steam { Geothermal Energy: The Power of Letting Off Steam}
Science editor Kenneth F. Weaver reports global interest and accelerating development in tapping the energy potential of our planet’s subsurface heat.
The Danube: River of Many Nations, Many Names
Its history spanned by strife, its blueness a fiction, central Europe’s great waterway links diverse cultures in a network of commerce. By Mike Edwards and Winfield Parks.
Arizona’s Suburbs of the Sun
David Jeffery and H. Edward Kim find the Phoenix- Tucson area, where the sun always shines while the water table falls, inundated by a continuing torrent of newcomers.
Oases of Life in the Cold Abyss
Geologists diving to the Galapagos Rift are astonished to discover colonies of sea creatures basking a mile and a half down in the warmth of hydrothermal vents.
Comeback in the Caribbean- -The Dominican Republic { The Dominican Republic: Caribbean Comeback}
Shaking off the Trujillo era, this West Indian nation sets new goals for economic growth and seeks answers to a long list of problems. James Cerruti and Martin Rogers explore the mountainous land Columbus loved.
Where Can the Wolf Survive?
Biologist L. David Mech surveys the prospects for an endangered, ever controversial animal, and tells how it ranges and hunts, lives and dies.

Be the first to review “National Geographic October 1977” Cancel reply 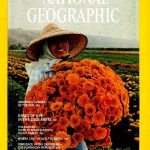