Carlsbad Caverns in Color: Man- made Light, Outshining the Sun, Reveals a Fairyland Made World- famous by the National Geographic Socieyt
New color photographs reveal the awesome beauty of New Mexico’s Carlsbad Caverns.
We Followed Peary to the Pole
On April 6, 1909, Cmdr. Robert E. Peary and his party reached the North Pole. Forty- four years later, the President and Secretary of the National Geographic Society paid a return visit.
Shetland and Orkney, Britain’s Far North: Change Comes Slowly to These Outpost Isles, Where Viking Ways Survive and Near- by Scotland Still Seems a Bit Foreign
The inhabitants of the Shetland and Orkney Islands in the far north of Scotland, make their living much as their ancestors did: tending sheep and ponies, fishing, and exporting the fine knitwear made popular by Queen Victoria.
Our Navy in the Far East
A strong U. S. naval presence in the Far East is necessary for Uncle Sam to keep a watchful eye on such trouble spots as Korea, Indochina, and the China coast.
At World’s End in Hunza: This Strange Shangri- La Near the Himalayas Has Few Laws or Taxes and No Army; Bridegrooms Take Mother on the Honeymoon
Hunza, a small state near the Himalaya, is in a strategic spot near Afghanistan, China, and India. The people live simple, healthy lives with few laws, almost no taxes, and no army, under a mir, or king.

Be the first to review “National Geographic October 1953” Cancel reply 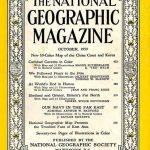