Pilgrimage to Holy Island and the Farnes: Hundreds of Pilgrims Wade Across Oozing North Sea Sands to Visit This Early Center of Christianity in Northern England
Holy Island, or Lindisfarne, in the North Sea, is a place of pilgrimage for those wishing to pay homage to early Christian saints.
Pack Trip Through the Smokies: You Can Ride Part Way into the Great Smoky Mountains National Park, But in the Wilderness You Must Leave Your Horse and Go on Foot
The best way to see the Great Smoky Mountains National Park is on horseback or on foot, and camping out under the stars.
Fish Men Explore a New World Undersea
Capt. Jacques- Yves Cousteau, co- inventor of the Aqua Lung, an underwater breathing device, leads a group of scientists into the Red and Mediterranean Seas to study underwater life.
Lost Kingdom in Indian Mexico: In the Ruins of Their Ancient Civilization the Tarascan Indians Hunt with Spears, Strum Guitars- -and Capture Brides
The Tarascan Indians live in a region of Mexico shaped by volcanoes and lakes. Many of them still live as their ancestors did, by farming and fishing.
Pennsylvania Dutch Folk Festival: Visitors by Thousands Flock to Kutztown, Pennsylvania, Each Year for a Sample of Dutch Culture- -and a Taste of Shoo- fly Pie
Kutztown, Pennsylvania, between Reading and Allentown, hosts the annual Pennsylvania Dutch Folk Festival. Funnel cake and shoofly pie are only two of the attractions.

Be the first to review “National Geographic October 1952” Cancel reply 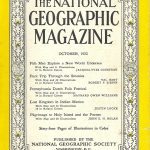