Far- Flying Wild Fowl and Their Foes
Known from the ground by the wedges they form in flight, families of birds including swans, ducks, and geese struggle to survive not only long migrations but also threats from hunters, corruption of water supplies, and destruction of their nesting sites.
Exploring the Stratosphere
A much anticipated scientific expedition in the Explorer balloon comes to a premature end when a rip causes the balloon to fall, forcing the three passengers to bail out by parachute.
Haitian Vignettes
A Marine Corps captain relates his experiences while stationed in Haiti and his impressions of the crazy- quilt of contrast between old and new, rich and poor, in the French- influenced island nation.

Be the first to review “National Geographic October 1934” Cancel reply 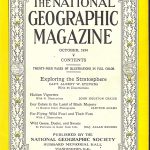