House- Boat Days in the Vale of Kashmir
Residing in luxury on the spacious borrowed houseboat of an English colonel, Florence H. Morden and her party explore the city of Srinagar and the nearby Shalimar Gardens.
Two Fighting Tribes of the Sudan
British administration in the often volatile Sudan region of central Africa allows a writer- photographer team to report on the Messeria and Amarar tribes in relative safety.
Manchuria, Promised Land of Asia: Invaded by Railways and Millions of Settlers, This Vast Region Now Recalls Early Boom Days in the American West
Two historic events, an influx of Chinese farmers and the rapid completion of the Chinese Eastern Railway, spur further economic development and attract foreign businesses.
Summer Holidays on the Bosporus
Separating Europe from Asia, the Bosporus strait, in flow a river and in depth a sea, makes the grade as a vacation destination with beaches, picnic grounds, and pleasure boats galore.

Be the first to review “National Geographic October 1929” Cancel reply 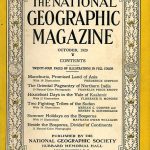