Sicily: Island of Vivid Beauty and Crumbling Glory
Lying just off the toe of Italy’s boot, colorful Sicily bears the marks of invasion by Greeks and ruins from its days as a cornerstone of the Roman Empire.
By Coolie and Caravan Across Central Asia: Narrative of a 7, 900- Mile Journey of Exploration and Research Over the Roof of the World, from the Indian Ocean to the Yellow Sea
Members of the Morden- Clark Asiatic Expedition of the American Museum of Natural History avoid avalanches in the Himalaya and survive capture by Mongolian soldiers during a journey over barley passable trails, and sometimes no trails at all.
How Latin America Looks from the Air: U. S. Army Airplanes Hurdle the High Andes, Brave Brazil Jungles, and Follow Smoking Volcanoes to Map New Sky Paths Around South America
Dubbed the Pan American Good Will Flight, a fleet of Army planes bring greetings from the United States to 20 nations extending from Mexico to Argentina.

Be the first to review “National Geographic October 1927” Cancel reply 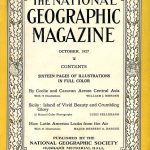