Transporting a Navy Through the Jungles of Africa in War Time
A member of a Royal Navy expedition to destroy an enemy flotilla in control of Lake Tanganyika recounts the team’s race to arrive before the onset of the rainy season – – and the post- Christmas victory that would change the fortunes of nearby British l
Peoples and Places of Northern Africa
A photographic tour.
African Scenes from the Equator to the Cape
Photos from the African colonial outposts of Britain, France, Belgium, and Portugal.
Along the Nile, Through Egypt and the Sudan
A new era dawns for independent Egypt, and Sudan may become as great a cotton producer as Egypt itself.
The Land of the Free in Africa
Liberia, a West African nation founded by freed slaves from the United States, looks forward to economic development.

Be the first to review “National Geographic October 1922” Cancel reply 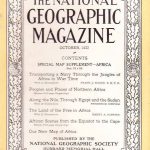