H. R. H. The Prince Philip, Duke of Edinburgh, Introduces to Members the Narrative of His Round- the- World Tour
Prince Philip explains the significance of his visits to various nations of the British Commonwealth.
Californians Escape to the Desert: City Dwellers by the Thousands Find Health and Peace in Sandy Acres Once Considered Fit Only for Jack Rabbits and Rattlesnakes
Crowd- weary city dwellers learn to love the tranquility of a region formerly regarded as a wasteland.
Off the Beaten Track of Empire
In a switch from state visits to capital cities, Prince Philip travels 40, 000 miles to tour the remotest corners of the British Empire.
How We Sailed the New [ Mayflower] to America: Why did [ Mayflower II] Take the Long Southern Route? What Were the Risks She Ran? Her Skipper Reveals the Answers
Captain Alan Villers makes an adventurous voyage from Plymouth, England, to Provincetown, Massachusetts aboard a replica of the pilgrim’s 17th- century galleon.
A 20th- century Saga of the Sea on Canvas: Marine Artist Smith Knew Every Sail and Spar Before He Painted [ Mayflower II] as a Supplement to This Issue
Marine artist Hervey Garrett Smith studied the Mayflower II from sails down to brass fittings before painting her as a supplement to this issue.

Be the first to review “National Geographic November 1957” Cancel reply 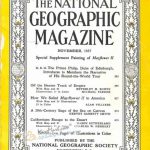